I Will Carry You – TATTRD Threads
Your cart

It was March 11th, my husband's 26th birthday. We were living in Portland, OR at the time and expecting our second child. I was 10 weeks pregnant and had my first ultrasound scheduled for that morning. Within 10 seconds of the ultrasound starting I just knew. The tech had this look on her face that I will never forget. She looked so hard at the screen. Her lips were pursed and her eyes were slightly squinted. I braced myself for the words I knew the tech was about to say. She turned the screen towards me and said the words no one wants to hear "I'm sorry, but it looks like there is no heartbeat". My world instantly shattered. I felt as though my heart was literally breaking into pieces. I had never experienced that type of pain before. It was excruciating and completely crippled me. My husband was in an intense doctorate program at the time and had to go back to school while I went back to get our toddler from a friend's house. I really didn't want to go sit at home so I took him to Target. I got some popcorn to entertain him and just walked aimlessly around the store. I remember feeling very angry. Angry at every person I saw with a smile on their face. How could all these people be happy when my world was crushed? My mom flew down to Portland the next day and drove back to our hometown of Langley, BC with me so I could receive medical care closer to home. It took about 10 days, three rounds of misoprostol (a medication to induce a miscarriage) and one d&c before my miscarriage was considered complete. I headed home to Portland feeling slighty broken, but hopeful. I knew I wasn't the first person to experience a miscarriage and I would not be the last. I took comfort in knowing that many other women had walked in my shoes before. I knew how common miscarriages were so I chalked my experience up to just plain bad luck and looked forward to getting pregnant again. Shirt by Loved by Hannah and Eli

We decided to try again as soon as we were given the green light, which was after I had one complete cycle. I went into that process with a little bit of anxiety, but mostly I was excited. We were lucky enough to conceive right away again. But just two weeks later it happened again. One day before our wedding anniversary I was in the ER being told that I had an ectopic pregnancy that they were worried may have ruptured. My world shattered once again. How could this happen to me again? Thankfully my ectopic was caught early and all I needed was a shot of methotrexate. The alternative would have been emergency surgery that included the removal of some or all of the effected tube and a D&C. I consider myself very lucky that I did not have to go through that procedure as I know many women have had that outcome.

Honestly, I hadn't fully recovered emotionally from the first loss and here I was again dealing with two losses in such a short span of time. We were told that we needed to wait at least three months and have a hysterosalpingogram (HSG) test before we could try again. Three months and one successful HSG test later we decided to try again. Two months later I got a positive pregnancy test! I was SO excited. I knew I was going to bring this baby home. I just had this overwhelming feeling of peace. This baby was going to make it. I had no doubt in my mind. Well, two weeks later it happened again. My third loss in eight months. Three babies that were once in my body were gone. Devastating doesn't even begin to cover how it felt. What the hell was wrong with me? Why couldn't my body do what it was supposed to do? I was only 26 years old. I had another D&C so doctors could do testing on the tissue to see if there was some undiagnosed issue going on. That testing revealed that it was simply bad luck. The baby, which we learned would have been a boy, had a common chromosomal abnormality that is always fatal. Typically it results in a miscarriage in the first trimester.

Life became extremely difficult for me. Every pregnant woman and newborn baby instantly triggered pain that cut me so deeply. I avoided eye contact with most pregnant women and avoided holding newborn babies. Since my first was now over two years old people would start asking when we were going to have another. I remember sitting in a doctors office one day with my toddler and a woman asked me how old he was. When I told her he was two years old she said "time to have another!". I just smiled and nodded, but inside my heart just ached. People always had such good intentions with their comments, but damn they hurt. It became difficult for me to even go on Facebook. It felt as though there was a new pregnancy announcement every week. I was so jealous of every person that announced a pregnancy. People used to tell me that I should just be happy for other people. I wish it had been that simple. Yes, I was happy others were getting pregnant and having their babies without the same issues as me. That was a given! I was just so darn sad. I wanted a baby so badly. I was in so much pain. That pain consumed every single fiber of my being. I am not exaggerating when I say that I felt physical pain every single day for most of the day. Sometimes I would cry so hard my head would ache for days after. Some days my heart hurt so much I worried it was going to explode through my chest. There were many times that I would lay in bed and I would just fall apart. My husband would wrap his arms around me and just hold me as I cried. There is a quote that I started to live by during my miscarriages. It goes "some things in life cannot be fixed. They can only be carried". There was no fixing this pain. All I could do was endure it.

I made the decision to be public on my social media after each of our losses. The support I received from friends, family and my online social network was amazing. I am sure there were (and still are) some people who think I talked about it too much. I loved these babies the second I knew I was pregnant with them so I felt no reason to not share their loss with my friends and family. Talking about miscarriage and infant loss makes a lot of people feel uncomfortable, I get that. Well, talking about it is nothing compared to actually living through it. However a woman wants to deal with her loss should be nothing but supported by her friends and family. Thankfully the majority of people in my life were an amazing support system. I am forever grateful for the friends and family that got me through that. The ones who grieved with me, the ones who sent me flowers, the ones who remembered the due dates and the ones who just let me talk and talk and talk (I talked about it a lot). I don't need to name specific names here, but those people know exactly who they are. Thank you.

There were times I thought maybe our family would just be complete with the one child we had. As the months went on my desire to give him a sibling kept growing and growing. I knew our family was not yet complete, so we decided we would try again. On February 25th, 2016 I found out I was pregnant for the fifth time. Shirts by Loved by Hannah and Eli

I thought I would be just riddled with anxiety, but that was not the case. I felt surprisingly zen throughout most of my pregnancy. I knew that I had zero control over the outcome of this pregnancy. I was going to love this baby and enjoy this pregnancy for as long as it lasted, whether that was the full 40 weeks or just 6 weeks. I trusted that my body knew what to do. I want you to read that part again. I trusted that my body knew what to do. That last statement was something that took me a long, long time to realize. My body was not broken. It had actually done exactly what it was supposed to do. It knew that those babies had abnormalities that were not compatible with life outside of my body and it did exactly what it was made to do. Again, that has taken me a very, very long time to realize. November 16th, 2016 our rainbow baby arrived after almost a two year wait. Britton knew how long we had been waiting for him, so he decided to make his entrance into this world verrrrry quickly. He arrived into my arms on my bedroom floor after one hour of labour, which was very different from his brother's 27 hour long labour. Meeting him was the most amazing moment. I can't think about it without ugly crying, Kim Kardashian style. After he was born I just sat on the floor running my fingers through his hair and staring at him. We didn't know if we were having a boy or a girl, so about five minutes after he was born we took a look and were so excited to learn we had another son! Britton's birth has brought out a whole new set of emotions for me. Seeing him reminded me that I wouldn't ever get to meet those other babies, but at the same time I was able to meet him because of those other babies. Talk about a clusterfuck (pardon my language) of emotions. In a perfect world I would have just been able to have Britton without all the pain. I still grieve the losses of those three babies all the time. What they would have looked like. Who they would grow up to be. Even just driving sometimes I will hear a certain song and I just start bawling. I can still feel that pain deep within my heart. I don't think it will ever go away. Here we are though, over two years after that first loss. I am in a new place in my loss journey. What I have come to accept is that it was Britton who was meant to be a part of our family all along. All that pain, loss and suffering led me to him. He is absolute perfection and I am thankful every single day that he is part of our family. Blanket by Little and Luxe 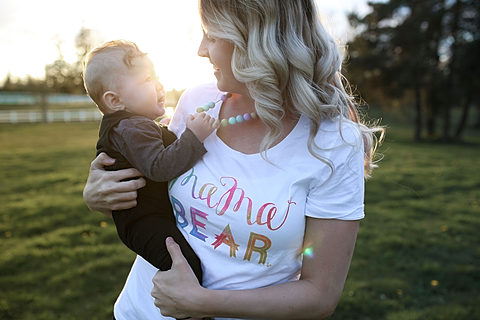 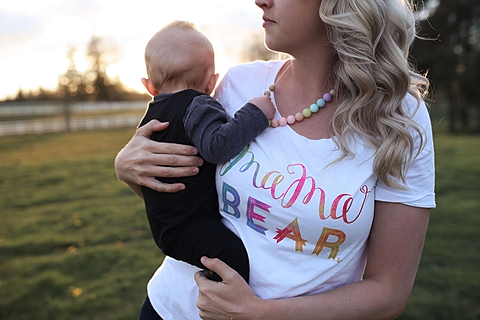 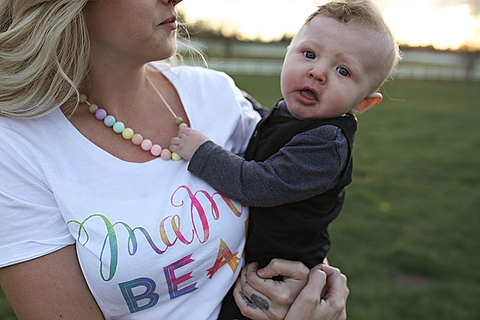 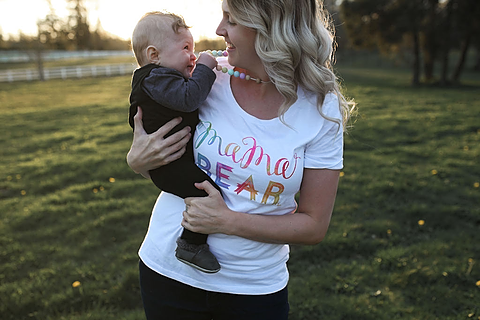 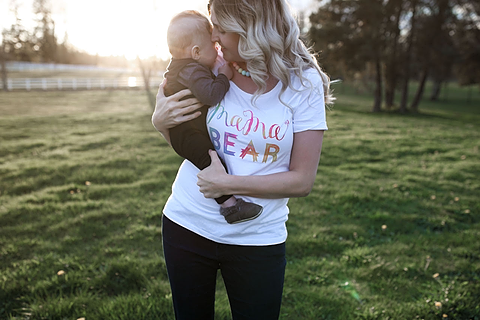 Be sure to check out Loved by Hannah and Eli, who created this gorgeous rainbow mama bear shirt! Proceeds from each shirt will go to a charity that offer grief counseling, healing assistance, emotional & financial NICU support, and educational information for all family members.

← Back to My TATTRD Life